When we arrive we will have an orientation and everybody will be given a map of the park and one day pass if purchased from us. The park opens at 10am. 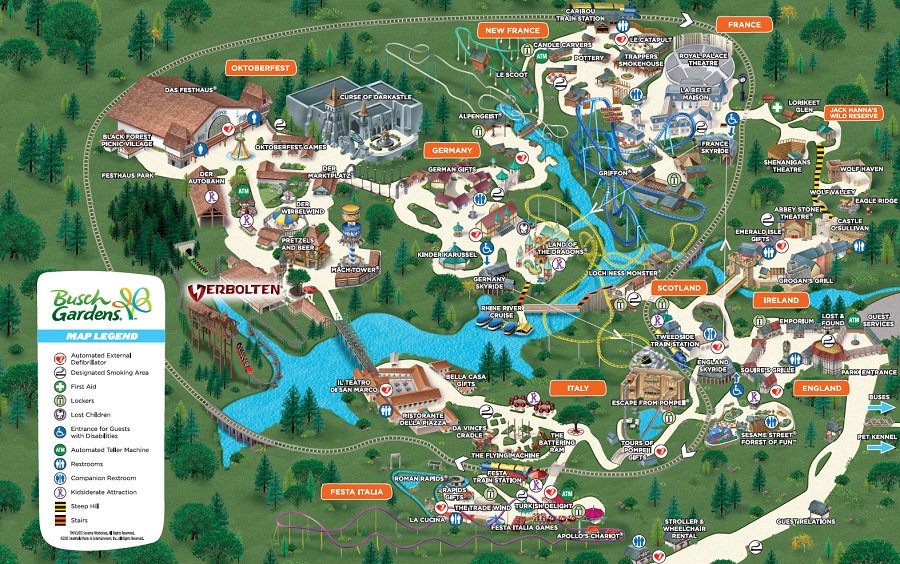 The tour guide will show you the most famous rides and attractions inside the park, but you can go on your own if you want to.

Busch Gardens Williamsburg opened May 16, 1975. With its European theme, the park was originally tagged "The Old Country." Attractions at this park include The Curse of DarKastle, Alpengeist, Escape from Pompeii, Apollo's Chariot, Loch Ness Monster, and Griffon. Added in 2007, the Griffon coaster has bragging rights as the tallest dive coaster in the U.S. The park is divided into seven sections, each themed to a different European country. On July 25, 2009, Busch Gardens announced that the Big Bad Wolf roller coaster would be retired September 7, 2009, after 25 years of operation due to its "meeting the end of its service life." and was replaced with Verbolten - a New Multiple Launch Coaster that opened in 2012. Newly added in 2009 was "Christmas Town," A Busch Gardens Celebration, with many themed holiday attractions and shows with 5 million lights and a 50' Light Animated Christmas Tree. Also in 2010, the 3-D ride Corkscrew Hill was replaced by Europe in the Air. Also New for 2010 was illumi Nights: A Busch Garden Encore, with many Mini nightly country shows and nightly fireworks set to a special soundtrack which is available during the special event in many gift shops. In 2010, Busch Gardens announced a drop tower called the Mäch Tower which was set to open in late Spring 2011 but was delayed due to train problems from Italy and opened in August 2011. On September 17, 2011, more information was given on the new multi-launching roller coaster called Verbolten that opened in spring of 2012 in the old Big Bad Wolf location.